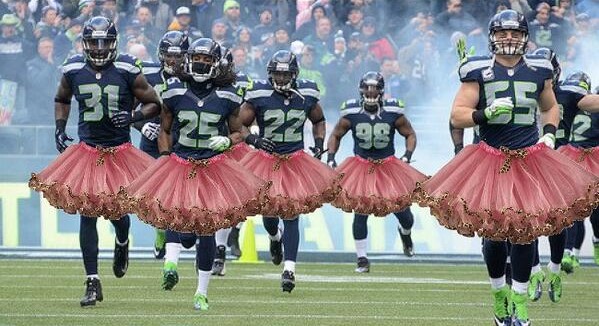 Last week, Anthony Dixon of the San Francisco 49ers reportedly sent out a tweet in which he referred to upcoming opponent Seattle Seahawks as the She-Hawks (see here).  My first thought was that this was an oddly juvenile attack as I thought that we had abandoned gender-based mocking through simple manipulation of words back in elementary school.  However, now that I think about it, I have grown quite accustomed to this practice in the professional sports that I spend so much time watching and which happen to be populated by grown men.  I vividly recall future Hall-of-Famer Shaquille O’Neal frequently jabbing at the rival Sacramento Kings by referring to them as the Queens.  Closer to home, supporters of the Washington Redskins – the NFL team for which I route, controversial name aside – routinely refer to the Dallas Cowboys as the Cowgirls when discussing their team’s primary rival.

I don’t really expect a sports world with its hyper-emphasis on aggressiveness and making money to be a source of progressivism on gender-egalitarian language.  Besides, much of what the media picks up on from athletes is pretty tame as compared to the everyday lives of men.  Just the other day, I witnessed a fight break out on a basketball court after one player casually referred to another as a bitch.  That accusation was enough for its target to threaten a clearly fearful teenager into submission.

Likening a man to a woman remains one of the most powerful offenses that you can hurl at a man.  I have to believe that the language that we use both reflects and reinforces our worldview.  Embedding the inferiority of women so casually and so deeply into our language must surely affect the way that men behave towards women.  I know of no empirical study that confirms this but this is what I do know.  If professional athletes were belittling opponents by casually linking them to a group to which I belonged, then I would need no study to prove that there were folks who unconsciously harbored negative feelings towards me and who sometimes acted on those feelings.